“My name is George S. Kollie, I am 20 years old, an Ebola survivor and a resident of West Point Community Zone 407. I am a 9th grade student of the James Doe Young Methodist High School located in Clara Town, Bushrod Island.

Presently, I have a family of eight, my three aunts, my sister, Annie Kollie, her three children and I. Our mother died in 2013 after a brief illness and our father had been taking care of the family with proceeds from his goldsmith shop when he met his untimely death in September 2014 from the deadly Ebola virus. 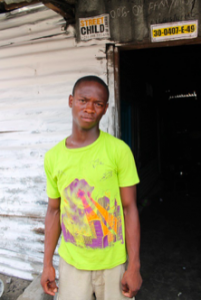 From the onset, I didn’t believe in the existence of a disease called Ebola. My perception was that the Government wanted to eat the Liberian people’s money and as such they were designing a strategy as they did for the army worm’s situation. I strongly held to this until my uncle came down with the virus in September 2014 and was taken to the Island’s Clinic Ebola Treatment Unit (ETU) where he died after a week. As a result, our home was in quarantine and about a week after my father started to show symptoms of the virus. Since I was the only man in the house at that time, I was compelled to look after my father without any protective gear. His close friend, Patrick Togba who also died at the same Island’s Clinic ETU, helped in the process. My father was taken to the Island’s Clinic where he died. My dad’s closest friend, Patrick Togba and I started showing signs a week after my dad passed away. We were taken to the same ETU for treatment but after the death of so many people all I could dream of was death.

Though we were fed three times a day and given medication regularly, all I had in my mind was the conviction that I was going to die because every day about ten to fifteen people died in the ETU. Day after day, we were given hope by ETU workers and sometimes they offered prayers for us.

After a week in the ETU, my dad’s friend Patrick Togba died as well and all hope of survival was gone. The only thing I did was to pray every day. I offer prayers to God to keep my soul and take me to heaven. After spending two and a half weeks in the ETU my condition started to improve little by little. Doctors and nurses started to congratulate me as I was reaching 21 days in an improved condition.

Finally, I was discharged from the ETU in October 2014, when I tested negative for Ebola after spending about a month at the treatment unit.  When I returned home, I was informed that my father’s friend’s (Patrick Togba) wife, younger brother, his daughter, my uncle’s wife, the boy that helped my father at his goldsmith shop, his mother and my little sister Paulina Kollie had all died. I was rejected by my neighbours and I only survived by the food given to me after I was discharged from the ETU. No one came around me for more than a month. Only my sister, my aunts and her children made me feel like a human. Gradually, one or two neighbours started getting brave enough to come round to see me after continuous awareness raising about Ebola by groups of YMCA peer educators. 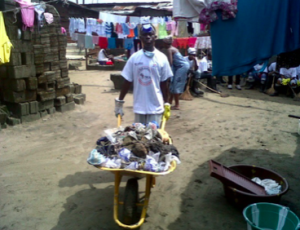 After the food given to me from the ETU ran out, I started struggling; I sometimes helped people to ride transport bikes in order to sustain myself. Daily, my sister and aunts would go out to find food for the house until one day I was given the opportunity to be selected to work on the YMCA food for work scheme. During the work, I had fun with other young people and community members, some of whom knew me and my family and those did not know me at all but were friendly. I made new friends during my one week of work and they all appreciated me and gave me some words of encouragement. I took my food home at the end of the week and my sisters and her children including my aunts were very happy to receive the food.

I want to say thanks to the YMCA, Y Care International and their partners for helping us through this crisis and to have the opportunity to serve my community, receive food and make more friends.”

You can support the work of Y Care by clicking here to donate or fundraise for them, visiting their charity page or watching a video of George’s story!